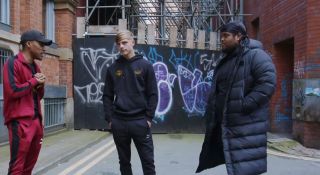 The emergence of Brandon Williams has been one of the biggest positives this season. He has come into the first team and offered competition at left-back for Luke Shaw, who needed it, and as a result we have a promising player for the future.

Although United suffered a 3-1 defeat at the hands of Chelsea in Sunday’s FA Cup semi-final at Wembley and Williams didn’t have a particularly good game, our hopes are very high for the young full-back and it won’t be long before Gareth Southgate is knocking on his door for a call-up to the England side.

In a recent interview with Chunkz and Yung Filly, as per the Pro:Direct Soccer YouTube channel, Williams opens up about how he was scouted by Manchester United at the age of 7, despite only starting to play football with his cousin a year earlier.

Williams reveals that Manchester City and Chelsea were also interested in him at the time, but being a lad from Manchester who’s dad is a red, there was only one option when United came calling.

He confesses to having little interest in football when he was a kid. It was his cousin who introduced him to the sport and showed him how to shoot, take a touch and chest the ball.

He also talks about the difficulties that he has encounter with fame, like not being able to stroll to Manchester city centre like he used to.

Check out the full Pavement To Pitch interview:

We also learned that Williams’ cousin is a boxer named Zelfa Barrett.