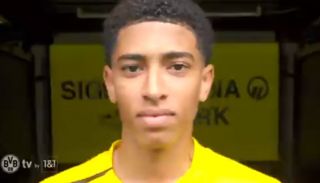 Jude Bellingham has been linked with Manchester United in recent months, but has opted to leave Birmingham City and continue his development at Borussia Dortmund.

Today it was announced that the youngster has completed his move to the Westfalenstadion, with the Bundesliga club releasing a video confirming the news via their official Twitter account, with players and staff singing along to ‘Hey Jude’ by The Beatles to welcome their new signing.

According to Sky Sports, Bellingham has signed for Dortmund for an initial fee of £25m which makes him the world’s most expensive 17-year-old in football history.

Meanwhile, Manchester Evening News writer Dominic Booth has explained why United did not sign Bellingham. He outlines that the midfielder’s desire to play first team football was among the reasons since Dortmund proposed an encouraging promise.

United were unable to guarantee first team football which doesn’t surprise me. In fact, I think Bellingham will remain on Ole Gunnar Solskjaer’s radar and they may rekindle their interest in the coming years.

Bellingham and his family were given a tour of Carrington training ground in March with the Reds attempt to win the race for his signature. Instead he has gone to Dortmund where the likes of Erling Haaland and Jadon Sancho both moved to light a spark to their playing careers.

Borussia Dortmund are fulfilling the fantasies of every @FootballManager player 🙌

The young talent they have is insane 🤯 pic.twitter.com/5U4dr69CAv

United will be aware that playing for Dortmund, who regularly compete in the Champions League, will put Bellingham on a much greater stage. More clubs will be watching him closely now he’s joined one of the biggest clubs in Germany.