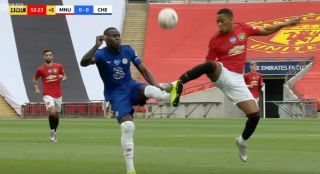 Mike Dean has been atrocious in the FA Cup semi-final between Manchester United and Chelsea.

Chelsea lead the tie 2-0 after Olivier Giroud opened the scoring, taking advantage of some poor defending and goalkeeping from David de Gea. Then Mason Mount scored straight after the break – another howler from our keeper…

But Chelsea keep getting away with blatant fouls and it makes you think whether Frank Lampard’s pre-match comments are playing on the referee’s mind.

An incident prior to half-time saw Anthony Martial running in on goal before being flattened by Kurt Zouma. The Chelsea defender lunged and made contact with Martial’s leg before contact with the ball was made.

Watch below, footage courtesy of BBC One:

Martial went down afterwards but seemed fine when Dean blew for the half-time whistle.

The last thing Ole Gunnar Solskjaer needs now is another player coming off injured after Eric Bailly was stretched off following a collision with Harry Maguire.