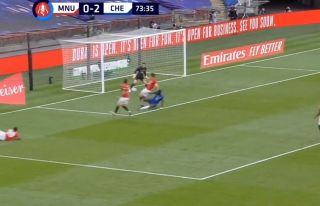 Manchester United are crashing out of the FA Cup in disappointing style.

Chelsea lead 3-0 with over 10 minutes remaining on the clock and they will take on Arsenal in the FA Cup final.

In what appears to be the final nail in the coffin, Harry Maguire put the ball into his own net to give Chelsea a three goal advantage.

United offered little to nothing throughout the game and certainly don’t deserve a place in the final, but I can’t help but question some of Mike Dean’s officiating. It was without question one of the worst displays from a referee I have seen this season.

Maguire didn’t have one of his better games but it will go down as one of De Gea’s worst!

Watch Maguire’s own goal below, courtesy of beIN SPORTS:

A terrible day for the Red Devils. Hopefully it doesn’t get worse…