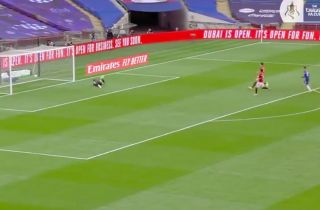 Manchester United have fallen 2-0 behind just seconds into the second-half against Chelsea in the FA Cup semi-final.

Chelsea took the lead moments before the break when Olivier Giroud got the run on Victor Lindelof and diverted home a shot that David De Gea should have saved.

De Gea’s error which resulted in Chelsea doubling their lead, however, was unforgivable.

Brandon Williams’ awful pass into no man’s land was met by Mason Mount in the middle of the park.

The youngster drove and hit his shot well, but it should still have been dealt with easily by United’s number one.

Unfortunately, the Spaniard must have completely took his eye off the ball as it somehow slipped underneath him.

Serious questions will be asked of De Gea after a disastrous performance so far for the Reds.