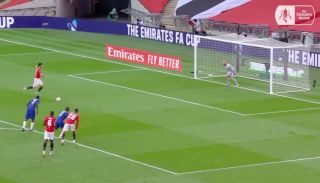 Manchester United have been given a sobering reminder of the huge amount of work that still must be done during the humbling FA Cup semi-final defeat against Chelsea.

Ole Gunnar Solskjaer’s men fell 3-0 behind the second-half after some horrendous defensive errors resulting in goals for Olivier Giroud, Mason Mount and an OG from Harry Maguire.

But United did get a consolation in the final stages when Bruno Fernandes slotted past Willy Caballero from the penalty spot.

Anthony Martial was fouled by Callum Hudson-Odoi in the box, before the Portuguese playmaker nonchalantly stroked home.