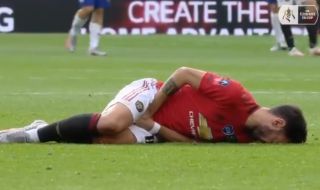 Bruno Fernandes felt that one – and so did we!

Chelsea are getting stuck in at Wembley and there’s been a couple of nasty incidents, mostly ignored by referee Mike Dean.

One saw Bruno Fernandes suffering a kick into the private area – with the flying foot aimed by Chelsea defender César Azpilicueta.

The Spain international got away with it (surprise, surprise) and left Fernandes floored in utter agony.

Watch the incident below, footage courtesy of BBC One:

At least Fernandes got up and played on, but we can all accept that he was in serious pain after receiving the kick.

However, United player who suffered a knock is Eric Bailly — after colliding with Harry Maguire — and he left the pitch on a stretcher with a neck-brace.

These were worrying scenes and we hope Bailly will be okay.