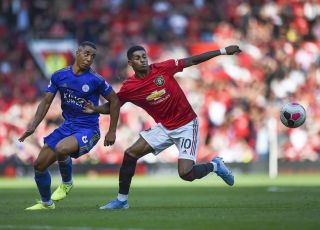 Manchester United have failed in their pursuit to win this season’s FA Cup after a humbling 3-1 defeat to Frank Lampard’s Chelsea earlier this evening. United’s attention must now turn to securing Champions League football next season by finishing inside the league’s top-four. The Reds have two games remaining and nearest competitors Leicester City who sit on the same points with the same goal difference have just the one; against Manchester United.

The Premier League title may already be long decided but the top-four places face a dramatic climax as United, Leicester City and Chelsea all look to battle it out for just two remaining places.

As it currently stands Chelsea sit in third place on 63 points after 36 games, Leicester City are clinging to fourth spot on 62 points after 37 games and United remain in fifth place also on 62 points but separated only by goals scored.

Elsewhere, Leicester City who have played a game more than both United and Chelsea have one game remaining on the final day of the season against none other than United themselves.

The league’s conclusion could see a Premier League first; a Champions League play-off.