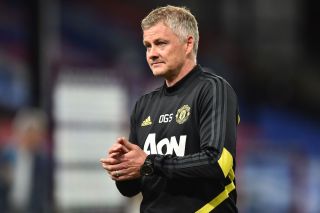 Ole Gunnar Solskjaer has rested three of his elite performers for Manchester United’s FA Cup semi-final against Chelsea at Wembley.

Goalscoring threats Anthony Martial, Mason Greenwood and Paul Pogba all start on the bench this evening, with Solskjaer opting for the five-at-the-back system that has been successful against Chelsea already this term.

Daniel James, Fred, Eric Bailly and Brandon Williams return to the starting XI with Solskjaer understandably freshening things up from the side that looked lethargic in stages against Crystal Palace on Thursday.

Solskjaer has selected a team with enough quality to reach his first major final in charge of United, and the inclusion of Bruno Fernandes yet again proves just how pivotal he has become.

Fernandes will be expected to unlock the Chelsea defence by finding Marcus Rashford and James in what is expected to be a split-striker system that was effective at Stamford Bridge in February.

But the fact that three of United’s most in-form stars in Martial, Greenwood and Pogba are rested today instead of previous league games against Palace or Southampton shows where the real priorities lie.

It’s imperative for Solskjaer’s rebuild that United finish in the top four so they can acquire their top talents in the transfer window and avoid further financial loss during the coronavirus pandemic.

But United have a luxury of options when using their five substitutions and can damage Chelsea with fresh quality in the second-half.

See the team news in full below, as posted on the club’s official twitter page: