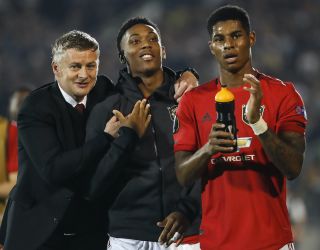 Manchester United manager Ole Gunnar Solskjaer was lethal around the box during his playing days. It’s no wonder to hear he’s passing that knowledge onto Marcus Rashford and Anthony Martial by taking part in training with the striking duo.

Solskjaer scored 126 goals for United in a 10-year spell at Old Trafford as a player. Now he’s back as manager and doing a very good job.

Especially when it comes to his forward players with Rashford and Martial both having scored 22 goals in all competitions this season. He has opened up on the work he does in training.

“I do more with strikers than defenders, that’s true,” Solskjaer said, as per the Daily Star.

“I think I have got more expertise in that part of it, so yeah I like to join in and watch them and give them pointers and tips.

“We look at goalkeepers, how they stand, we do a lot of work but it is the effort from the boys. The calmness is the main thing.

“Marcus Rashford and Anthony Martial is enjoying themselves, when they go out onto the pitch for a shift, they go out with a smile and they defend each other too.”

United take on Chelsea this evening in the FA Cup knowing a win will take them to a final they should be winning, after Arsenal beat Man City 2-0 in the other semi-final. But first we need to get the hard work done and ensure we do whatever it takes to beat Frank Lampard’s side at Wembley.

Solskjaer knows what it takes to win the FA Cup after doing so twice as a player.

“When you are at United, yes, you need to win trophies,” he said. “That’s what we’ve done in our history, and we want to win trophies playing the right way.

“We’ve had some great games against Chelsea over the years; this is the fourth year running we’ve played them in the cup so hopefully it will be an exciting game.

“We’re fine, we’re fit and the players are raring to go, want to play again.

“We need to smile and go into this, we have earned this right, no-one thought in January that we would be in with a shout for top four. We have done fantastic since the restart.

“These are the games that matter. That is the thing at Manchester United, you have to step up and show your personality.

“Wembley and a trophy is massive for any player and team to win, our main focus now is to get to the final and then look at West Ham and Leicester after that.”