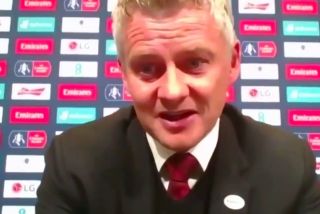 Manchester United have crashed out of the 2020 FA Cup after a humbling 3-1 semi-final defeat to Frank Lampard’s Chelsea.

United were utterly poor this evening in a game which could have seen manager Ole Gunnar Solskjaer challenge for his first piece of silverware as United boss. Sadly, the wait will go on for Solskjaer as he is now forced to focus his attentions entirely on securing a place in the league’s top-four.

After a rather abysmal performance all round in today’s game it is hard to pick out who was the Red’s best player, but one player who definitely won’t be getting any praise is goalkeeper David De Gea.

The Spanish ‘keeper once again was the architect of his own downfall; it’s perhaps harsh to blame the entire defeat on the 29-year old ‘keeper, but he certainly didn’t help the cause.

De Gea started the game well after showcasing a decent save from a thunderbolt of a strike from Chelsea full-back Reece James, however, moments before the half-time whistle De Gea’s ghosts came back to haunt him as he tumbled an effort from striker Olivier Giroud.

It didn’t get much better for De Gea as just the other side of half-time Mason Mount doubled Chelsea’s lead in a strike any top-flight keeper should be saving and saving comfortably. Sadly for De Gea and United, Mount’s shot found it’s way into the side of the net and the game suddenly seemed too far out of reach.

Speaking after the game, Solskjaer addressed his keeper’s performance and highlighted the error which lead to Chelsea’s opener, as per BBC Sport, the Norwegian said: “I can’t speak for David De Gea’s confidence but he is mentally very strong. He knows he should save that one 100 times out of 100 but that’s football for you. I made the decision to play him and mentally he was ready for it.

“You know Olivier Giroud’s movement you know he goes to the near post and we should defend that better. We are a little too late in those situations and the second goal was very avoidable.”

🗣 "Everyone has to perform, David knows he should've saved the second goal. That's done now we've got to move on"