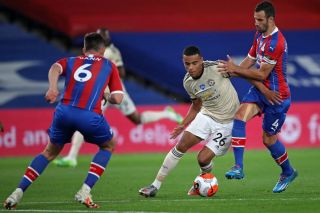 Mason Greenwood is in talks over a new double-your-money deal at Manchester United.

The young Manchester United striker renewed terms nine months ago, seeing a hike from £800-a-week to £25,000-a-week on a five-year contract, and the Mirror claims he will be handed another major pay rise after an amazing breakthrough season in the Premier League.

Greenwood has scored 16 goals this season and the manager has found it difficult to leave him out of the startling line-up since the Premier League resumed following its initial suspension amid COVID-19. The youth team graduate has edged Wales international Daniel James out of the team which only strengthens squad competition.

He’s remarkable goalscoring tally has left him just one strike away from equaling a record shared by three United legends: George Best, Wayne Rooney and Brian Kidd. They all hit the net 17 times as teenagers.

This is the club rewarding the youngster’s excellence with hard money in a bid to show others around his age what they can achieve. It shows a growing confidence in his ability.