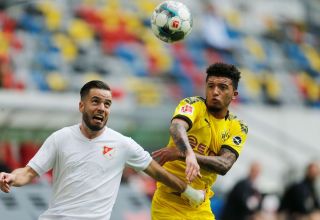 In what would be deal of the summer, Sancho could return to the Premier League and become an instant star at Old Trafford, teaming up with fellow England internationals Marcus Rashford, Harry Maguire, Aaron Wan-Bissaka and co.

The United team is growing with hungry young players who are talented and desperate to achieve success. A win over Chelsea later today would see the Reds secure a place in the FA Cup final against Arsenal, after the Gunners beat reigning champions Man City 2-0 at Wembley.

Sancho would be an exciting addition though, as United show encouraging signs in the final third since January’s arrival of Bruno Fernandes. Throw the former City youth player into the mix and defenders will be running scared in the opposite direction.

According to The Sun, there is almost an agreement in place over the £100m-rated winger, who wants to move to Old Trafford in particular if he’s to return to English football.

This of course comes after Sancho kept tight-lipped and failed to commit his future at Dortmund when asked by World Soccer Magazine, as per the Daily Express.

He said: “I don’t know what to say to that. It’s hard to say. That’s the future.

“You never know what could happen, so we will wait and see.”

I understand a player not wanting to give anything away until it’s official, but surely something is going on if Sancho is unwilling to give Dortmund fans assurances over his future.

It sounds like the end of his time at BVB is near!