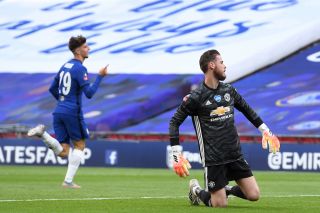 Reprehensible error for Chelsea’s second that put United on the back foot immediately in the second-half. The Spaniard isn’t immune from criticism from the first goal either, as he should have kept out Olivier Giroud’s effort. 3

Should have been rested after looking lethargic against Crystal Palace on Thursday evening. His tiredness showed. 4

Another United defender due a rest, Maguire was run ragged by Chelsea’s attack this evening. An own goal compounded his misery in a poor showing. 4

Battled hard and made some key blocks but looked shaky in possession. Had to be stretchered off before half-time in a nasty collision and we wish him the best in his recovery. 5

Offered very little in attack in the first-half and his kamikaze pass led to Mason Mount doubling Chelsea’s lead after the break. 4

Was left vulnerable to Chelsea’s high press and had little help from his midfield teammates. One of United’s better performers. 5

Overrun by Chelsea’s intense press led by Mateo Kovačić and Mason Mount. Haphazard midfield display as he squandered possession on plenty of occasions. Replaced before the hour-mark as United looked to fight back. 3

Looked lost without a teammate of the quality of Paul Pogba to feed from and was wasteful and overambitious in trying to break down Chelsea’s stubborn defence. 5

Was a victim of Solskjaer’s five-at-the-back system and had little opportunity to run at Chelsea’s defence. 4

Non-existent throughout and almost deserves sympathy for a lack of support in a failed split-striker system. He has been poor since last month’s restart. 3

Should have come on earlier. 5

Allowed Wan-Bissaka a rest when the result was a formality. 5

Struggled to have an effect on the game. 5

Won the penalty that was converted by Fernandes in the closing stages but fought a lost cause. 6