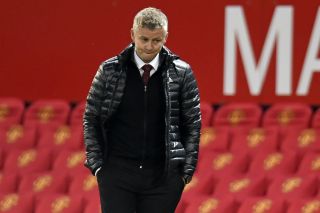 Manchester United have failed to reach the 2020 FA Cup final after an abysmal performance at Wembley Stadium which saw the Reds well beaten 3-1 by Frank Lampard’s Chelsea.

A much changed United side were second best all evening against a throughly dominant Chelsea side.

Although it must not be forgotten that United came into the game with a two day rest period opposed to Chelsea’s five.

Despite the clear advantage in terms of rest, the Reds failed to put up a fight in more or less every aspect of the game.

Such an underwhelming performance was not expected as United went into this evening’s game on a 19 game unbeaten run.

Manager Ole Gunnar Solskjaer is now forced to focus his side’s attentions solely on securing a place in the league’s top-four before the Europa League restarts at the beginning of August.

In light of today’s FA Cup semi-final, the United faithful have taken to Twitter to express their feelings:

Real shit performance today. FA Cup would have been nice this year. Much more important match Wednesday however. Need to smash west ham and get some breathing room going into next Sunday. #MUFC

I’m sorry but Solskjaer couldn’t win today. Could have played the strongest team , lost and then we are in all sorts of trouble Wednesday . He had to make changes. Get behind the team, they’ve just gone 19 unbeaten for christ’s sake. The overreaction is abysmal. #MUFC 🇾🇪

Needed this kick up the arse ..to go into next two games and Europa League.. #MUFC

First team is decent
Squad depth is wafer thin
How many more mistakes allowed by De Gea
Schedule taking its toll on this squad
Still a lot of players needed in+out if united to win trophies again. #MUFC

Poor performance across the pitch from start to finish. It hurts that we lost but we’ve got Top 4 and Europa to strive. The season is not over yet. And ofcourse Sell De gea. #MUFC #MUNCHE