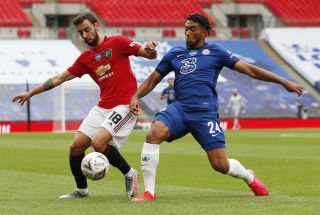 Manchester United and Chelsea have reached half-time in this evening’s second FA Cup semi-final with the winner set to play Arsenal in the final on August 1. United will be gutted to go into the break 1-0 down after Chelsea target man Oliver Giroud opened the scoring in the 57th minute. Yes you read that right.

The Reds have started much the slower of the two sides and no doubt manager Ole Gunnar Solskjaer will be eager to reassemble his devils in an attempt to inspire a better second-half performance.

Despite still seeing a strong line-up from Solskjaer the Reds have put in a very lacklustre first-half display which has seen an energetic Chelsea press and get the better of United in more or less every area of the pitch.

Just shy of the half-time whistle centre-back Bailly was forced off after what appears to be a serious head injury after a collision with team-mate and captain Harry Maguire. Bailly’s nasty looking injury was the cause for 14 minutes added injury time.

The unfortunate turn of events led to the introduction of in-form striker Anthony Martial as Solskjaer and his coaching team look to tweak their team’s system.

During the break, fans have taken to their social media to react to their side’s first half display. It doesn’t make pleasant reading i’m afraid.

Two extra days recovery for Chelsea showing. Have you ever seen a ref get in one teams way as often as Mike Dean in the first half?

Mike dean having a stormer. 11 fouls no bookings for Chelsea…

Come on United up the pace #MUFC

Has been a disruptive half disappointing to concede a goal at the stroke of HT. Lindelof has to do better #MUFC #FACup

Man what a dreadful half. Worst possible way to end it as well… #MUFC #GGMU #FACup

Read more: Man Utd closing in on £100m-rated Sancho who remained tight-lipped when asked about his future