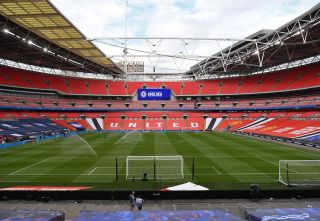 Manchester United are set to face-off against Chelsea in the FA Cup semi-final in a little under half an hour in a game which is arguably both sides most important game of the season, thus far.

The United team news has been released ahead of kick-off in a starting line-up which sees five changes from the side which started against Crystal Palace earlier in the week.

Manager Ole Gunnar Solskjaer has opted to stick with number one David de Gea in between the sticks despite his recent comments which suggested back-up keeper Sergio Romero may continue his familiar cup role.

Elsewhere, United appear to be lining up with a less than traditional back five which sees full-backs Aaron Wan-Bissaka partner youngster Brandon Williams who comes in, in place of the injured Luke Shaw. At the heart of the United defence is a back three which contains Victor Lindelof, Eric Bailly and club captain Harry Maguire.

Further up the pitch fans can expect to see Fred and Nemanja Matic form a double pivot with star-man Bruno Fernandes sitting behind the strikers.

Marcus Rashford and Daniel James will be leading the line, presumably in a staggered shape with one, likely to be James, sitting off the other.

Overall, a very exciting line-up for the Reds which has undoubtedly been influenced in light of Arsenal’s shock result in last night’s first Semi Final which saw the Gunners beat Cup favourites Manchester City 2-0.

Fans have now taken to their social media to express their thoughts ahead of the big game.

Not convinced about this line up, but we will still get the job done. #MUFC #FACup https://t.co/gCv9JPsLow

Don’t know why we’re playing a back 3. We are a much better team then Chelsea and shouldn’t have to change our game to beat them.#mufc https://t.co/O6ZrPI6JU9

That’s such a defensive lineup. I reckon the plan is to hit on counters. Just like the first game of the season. #MUFC

That’ll be his job today. Rashford, Bruno and James will be pressing like demons. #MUFC https://t.co/r0trZ63CdH

Both #MUFC and #CFC with an interesting lineup. United have PP, Martial and Greenwood on the bench while Pulisic is rested by Chelsea too by putting him on the bench. Interestingly, chelsea going 3 at the back too. #MUNCHE #EmiratesFACup

Obviously Ole knows best with the players physical conditioning but I would of guessed Bruno would of been rested today. #MUFC