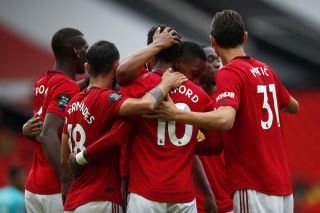 Manchester United and Chelsea are still fighting for a Champions League spot in the top four, but today they both have one eye on qualifying for the FA Cup final.

On Saturday we learned that Arsenal will play today’s winners in the final which will have plenty of Reds optimistic about Ole Gunnar Solskjaer winning a trophy in his first full season should they get past Chelsea at Wembley. The Gunners beat last season’s FA Cup champions Man City 2-0 in the other semi-final.

The race for top four has been ongoing ever since the Premier League resumed in June but this is something different. Moreover, Chelsea will be looking for redemption after losing three times to United already this season.

The rights for FA Cup action has been split between BT Sport and BBC again this season.

Coverage for Manchester United vs Chelsea will begin on BBC One (free-to-air) at 5.30pm, while fans can also stream the match via iPlayer.

Officials via The FA

We’ll have team news and plenty of match coverage throughout the day, so make sure to follow @StrettyNews on Twitter.