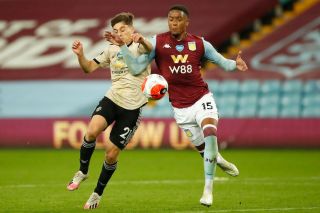 Manchester United have arrived at Wembley for their FA Cup semi-final against Chelsea and Ole Gunnar Solskjaer has named his starting line-up.

Ole Gunnar Solskjaer and Frank Lampard meet for the fourth time this season as Manchester United fight for a place in the FA Cup final.

The biggest news from the line-up is that Paul Pogba and Anthony Martial are on the bench, with Fred and Daniel James coming into the starting eleven.

Solskjaer has opted to start with a back five consisting of Aaron Wan-Bissaka, Victor Lindelof, Harry Maguire, Eric Bailly and Brandon Williams — with David de Gea in goal, which is a surprise given Sergio Romero has played most games in cup competitions this season.

The midfield consists of Nemanja Matic, Fred and Bruno Fernandes while Marcus Rashford and Daniel James will provide pace on the flanks as well as goalscoring opportunities.

It would be a great boost for the Norwegian boss if he could finish his first full season as United manager with a piece of silverware, though Lampard finds himself in the same boat.

Arsenal beat Manchester City 2-0 in the other semi-final so it gives us an extra incentive to reach the final as it’s become much more winnable, not that we’ve struggled against Pep Guardiola’s side this season.