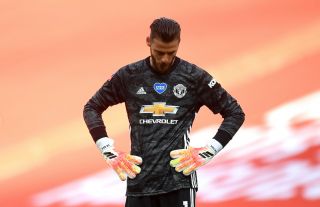 Manchester United’s hopes of a record breaking 14th FA Cup victory were ended as Chelsea emerged deserved winners to set up an all-London FA Cup final against Arsenal in August.

Ole Gunnar Solskjaer left Paul Pogba and Anthony Martial on the bench with the top four on the line but it was a gamble that backfired as the Reds endured a bad day at the office, second best in every department as Frank Lampard got the better of Solskjaer for the first time this season and ended United’s nineteen game unbeaten run in the process. There will no doubt be a post mortem going on in the United dressing room and here are three things we picked up on in the aftermath of our woeful Wembley day.

David de Gea has never been far from the back pages this season, and questions will be asked again after a shocking display in which he was at fault for two – if not all three – of the Chelsea goals. De Gea made a flimsy attempt to stop Olivier Giroud’s daisy cutter shortly before half-time before allowing Mason Mount’s tame 2o yarder to squirm through him. Even Marcos Alonso’s effort, deflected off Harry Maguire, should have been dealt with, and it capped a catastrophic day for United’s number one. Sergio Romero had played in every round and surely would have fared better than his more illustrious counterpart. I think the Argentina international saves the efforts that DDG makes such a hash of. With Dean Henderson’s future still unclear, pressure is mounting for United’s unreliable Spaniard.

With United in the thick of a thrilling battle for the top four and the Europa League still to come, Solskjaer opted to rotate his team with only two days turnaround since the win over Crystal Palace. Paul Pogba, Anthony Martial and Mason Greenwood were left on the bench with Wednesday’s league game against West Ham in mind. United’s game plan was clear – keep the tie tight and then unleash the armoury later in the game to win it, but that all changed with De Gea’s first error that put Chelsea in the driving seat. I didn’t disagree with the selection and possibly would also have rested Aaron Wan – Bissaka with a tiring team in need of rotation and the FA Cup lowest on the list of priorities, but Solskjaer didn’t learn the lessons from the last round at Norwich and a result United turned in the worst performance of our season. Managers are judged on such decisions and whilst I understood the decision to rotate, Solskjaer and his men have blown a huge opportunity to secure passage to a major cup final.

Top four finish and Europa League to salvage the season

Despite an uncharacteristically desperate showing, this was a day that wasn’t all bad for Manchester United. Leicester’s defeat at Tottenham means that two draws from the final two games of the league season would be enough for the Reds to clinch that coveted Champions League berth. That is more important than any FA Cup victory and with the Europa League – albeit a watered-down version – still to come in August, this is not the end of United’s season. We definitely would have settled for this position in January. Having been on a brilliant unbeaten run since January, and beaten Frank Lampard’s side three times this season, there seemed a certain sense of the law of averages working in Chelsea’s favour. Missing out on the final is a huge disappointment, but there’s still plenty to play for and, luckily for us, the games are coming thick and fast with Wednesday’s West Ham game a chance to flush this result out of our system. The Reds look mentally and physically exhausted but have to raise their levels and drag themselves over the line in these final weeks of the campaign. There have been signs of United wilting under the pressure but Leicester’s capitulation should be motivation enough to finish the season strongly.