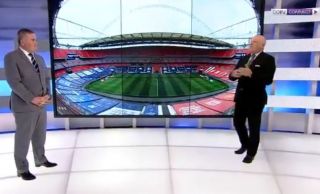 Andy Gray has hit out at Ole Gunnar Solskjaer after Manchester United crashed out of the FA Cup at the hands of Chelsea.

The former Everton player turned football pundit took aim at Solskjaer’s selection for the game suggesting that the United manager missed a trick by not starting his best players.

Anthony Martial, Paul Pogba and Mason Greenwood were all benched from the beginning but before we blame Solskjaer, let’s not forget we had just 48 hours to prepare for this semi-final after beating Crystal Palace 2-0 on Thursday. Chelsea last played on Tuesday giving them longer to rest up to ensure their players would be ready to fight for a place in the final.

That’s why I take an issue with Gray’s assessment. He totally overlooks the fact United had less time to prepare for the match despite Solskjaer making note of how unfair it was before the game.

Instead he looks at how Solskjaer named the same starting eleven for five consecutive games, which as a counter argument explains why we are looking good for a top four finish and getting back into the Champions League.

Moreover, Chelsea have greater squad depth than United and that really showed today. It’s something the manager needs to address in the transfer market.