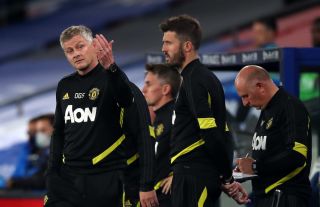 Manchester United are preparing to face-off against Chelsea tomorrow evening in the second of two FA Cup semi-finals.

Ahead of tomorrow’s crucial cup tie, manager Ole Gunnar Solskjaer has revealed that he expects his side to be without at least one key first team player. Luke Shaw who went off the field injured after turning his ankle against Southampton earlier in the week is a player who Solskjaer does not expect to feature tomorrow.

Shaw was arguably one of United’s better players against the Saints in a game which saw United eventually draw 2-2, however, an unfortunate injury deep into the second half forced the left-back off the field of play.

The 24-year old defender did not feature in United’s last game against Crystal Palace despite being pictured arriving at the club’s training ground Carrington just days earlier.

The focus for Shaw will now be recovering from injury and returning to full fitness as his manager admits that he does not expect him to feature tomorrow.

Speaking about Shaw’s current state ahead of tomorrow’s match, as quoted by Manchester Evening News, Solskjaer said: “I don’t think Luke [Shaw] is going to make it. I think he’ll be out.”

It raises questions about whether Shaw will be back in time for our remaining two Premier League fixtures.