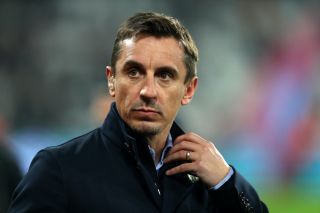 Ex-United legend Gary Neville has issued a warning to his former ahead of their proposed transfer of number one target Jadon Sancho.

Neville’s former side have been heavily linked with Borussia Dortmund’s for the best part of 12 months now. However the longer the saga goes on, the less likely it is appearing that United will get the deal over the line and Neville believes the Reds should go all out to secure the attacker in what he describes as an opportunity they’ll never get again.

Sancho, 20, has endured one of the most successful individual campaigns among all European players this season, scoring 17 goals and providing another 16 assists in 25 Bundesliga starts.

The highly impressive numbers Sancho boasts is one of the main contributors to United’s suspected interest in the young Englishman.

However, according to The Times, Dortmund are remaining firm in their valuation of over £100m up front for their star-man.

Dortmund’s refusal to lower their asking price and accept an offer which contains add ons opposed to a lump sum is looking like it could throw a spanner in United’s transfer works.

As quoted by Metro, speaking on the Webby & O’Neill YouTube channel, about United’s proposed move for Sancho, Neville said: “You’re still basically going to have to encourage the players to come, you’re still going to have to pay the money to the club.

“You’re not going to be able to bully Borussia Dortmund if they’re going to sell him.

“When all the other clubs are armed with money, he might have four or five choices. The fact that he could come to Manchester United this summer, because Manchester United are the only shop in town maybe that can afford him this summer, is where United will get players they may not have been able to get previously.

“Manchester United I’m sure over the last six, seven, eight, nine years when they’ve signed players and they’ve spent all that money, they have probably wanted players that have gone to other clubs but they’ve not been able to get them because those players have preferred to go and play for other clubs.”

Read more: Solskjaer fires back at Lampard after Chelsea boss hints at VAR bias towards Reds