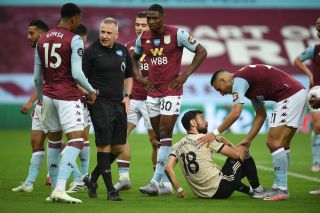 Manchester United and Chelsea are set to play in the second of two FA Cup semi-finals tomorrow evening. The clash will see two of English football’s powerhouses collide at the world famous Wembley Stadium in a game which will confirm who will be contesting for the 2020 trophy.

Ole Gunnar Solskjaer’s Manchester United go into tomorrow’s game in decent form with the Reds being on an impressive 19 game unbeaten run and Lampard will be all too aware of how confidence must be among his opponents.

Chelsea’s recent is less than impressive having suffered two heavy defeats against West Ham (3-2) and Sheffield United (3-0) in their last six games.

Lampard will know that he needs to get his Chelsea outfit firing on all cylinders if they’re to stand a chance of beating the free flowing and offensive devastating United.

Having won England’s most famous cup competition four times as a Chelsea player himself, Lampard is all too familuar with what is going to be required tomorrow.

The Chelsea boss went onto highlight United’s impressive form, Lampard said: “It’s been a tough year where maybe at times people have questioned whether we would push to certain levels. We are now at a level in the Cup where we are playing a team in fantastic form, and if we were to get through that we’d play another team in really good form, and that’s the end of where it goes for me in terms of wanting to win: what it means for this club and the group.

“I was fortunate enough to win it as a player,” continued Lampard. “I grew up on it and those wins of my Dad in ’75 and ’80, so I have a strong feeling about the FA Cup, and that has never changed for me as the years have gone by.

“Now I am manager every cup you’re in you want to do your best to win it, and it wouldn’t fall short on me the pride of being able to walk out the club I love at Wembley. Even for a semi-final, it’s a huge game against Manchester United, and I will be very proud on Sunday.”

Lampard was also keen to dismiss his side’s results against United this season, having lost all three previous meetings to the Reds, the Englishman manager said: “They counter-attacked us at Old Trafford to great effect, pretty similar at the Bridge, so I won’t go short on those details, but what I won’t get caught up in is that we must have revenge because of that. We respect them as what they are: a very good team with very good individuals in very good form.”

Speaking in-light of United’s recent penalty decisions Lampard drew attention to star man Bruno Fernandes’ intelligence and issued a statement to his own players warning them to not to dive in, he said: “When players with such high quality and speed as the Manchester United forwards travel quickly, you have to move your feet and not dive in on them.

“That’s an important part of defending at any point in time. [Bruno] Fernandes is very clever in his movement, we saw that at Aston Villa to make something feel like a penalty when maybe it isn’t.

“We can talk about VAR decisions and whether they’re right or wrong, but if a player is going to dangle a leg and not work their feet, then you leave yourself open to penalties, VAR or no VAR.”