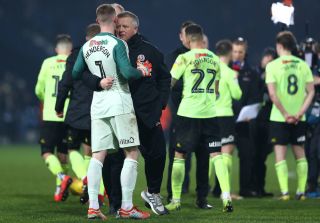 Blades boss Chris Wilder has now confirmed that his club have opened talks with United over a possible third on loan season for Henderson.

The young English goalkeeper is believed to be the long-term successor to Spanish international and decade long club servant David de Gea.

However, despite the long-term potential the young keeper boasts, it is clear his parent club are not yet ready to promote him to their senior side, instead opting for a third consecutive year on loan with the Blades.

Sheffield United manager Chris Wilder has confirmed that talks between the two clubs have already begun as he seeks to retain the services of his number one next season.

Despite Sheffield United signing fellow goalkeeper Wes Foderingham earlier this week, as per BBC Sport, Wilder remains committed to extending Henderson’s loan, he said (via Manchester Evening News): “Dean and Manchester United know our views on that, we already have started talking to the player and Manchester United.

“It is their decision and the boy’s decision, we would love to extend that for another season and when we get the news on that decision we will let you know.