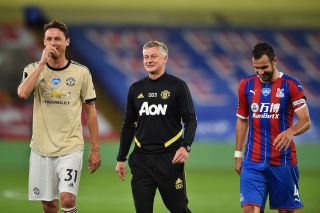 Manchester United ground out a 2-0 win over Crystal Palace, courtesy of spectacular goals and performances from Marcus Rashford and Anthony Martial. However, the match was far from simple for Ole Gunnar Solskjaer’s side, as Monday night’s struggles to transition from defence to attack were prevalent once again in United’s performance, putting the result in danger at times.

Notably, Timothy Fosu-Mensah and Scott McTominay struggled as ball-progressors from left-back and holding midfield, respectively. This made it easier for Crystal Palace to mark out other outlets, putting pressure on Harry Maguire and Paul Pogba, in particular, to build United’s play from the back.

Palace, happy to give the one-footed Fosu-Mensah and the conservative McTominay ample time on the ball, were then able to focus their efforts on the likes of Pogba and Fernandes, nullifying their respective games.

Pogba still had an effective match in terms of ball retention, completing 90.8% of his passes and winning 3 fouls, but he often had to drop as deep as the side’s defenders to pick up the ball, rarely entering the final third. Fernandes also dropped below the half-line for long periods of the match, subsequently struggling to complete many of his typically risky passes.

Fosu-Mensah’s struggles are understandable; not only did Thursday’s match represent his long-awaited return to football, but the player also rarely plays on the left side, and his display showed a respectable amount of defensive awareness for that level of rustiness. Fosu-Mensah’s inclusion came after a woefully unlucky double-injury to left-backs Luke Shaw and Brandon Williams against Southampton, both of whom should return for upcoming matches.

However, McTominay’s performance explained exactly why Solskjaer needs to enter the market for a defensive midfielder this summer. The manager made an understandable decision to place his faith in the 23-year-old given Nemanja Matic’s apparent exhaustion against Southampton. However, Solskjaer’s decision was not rewarded; McTominay’s poor positioning and lack of passing range made him appear to be the polar opposite of stalwart Matic.

McTominay is an industrious midfielder who can make the difference in both his own and the opposition box with crucial interventions, but in the middle third, he offers none of the measured, territorial control that has made Matic crucial to United over recent weeks.

Long-term, he will definitely be a squad player as a box-to-box midfielder for United, but his 3 defensive interventions and mere 51 passes (compared to Pogba’s 87) once again showed why he will never dominate a possession-based game the way Matic has in recent weeks.

Unfortunately for the United manager, Matic creates his own set of predicaments; on the wrong side of 30 and having covered many miles in his career, the Serbia international seems to struggle with the more minutes he plays, as his legs fail to act as quickly as his brain.

The circumstances lead to a glaring hole in United’s side that could prevent them from finishing in the Top 4 this season, and prevent further progress under Solskjaer next season- the lack of a top-class, well-rounded defensive midfielder who can play 40 matches in a season and reduce the burden on Matic.

Every side currently above United in the Premier League relies heavily on a defensive presence in their midfield. Fabinho, at Liverpool, is one of the best holding midfielders on the planet, Rodri has established himself as Fernandinho’s replacement at Manchester City, Leicester’s Wilfred Ndidi is one of Europe’s best tacklers, and N’Golo Kante orchestrated a Premier League championship in his first season at current club Chelsea.

Not only does Matic’s presence in the side lead to more clean sheets and better performances from Lindelof and Maguire, but it also clearly enables Pogba and Fernandes to play more luxuriously, differentiating United from opposition with their creativity. As Southampton showed on Monday, shut down Pogba and Fernandes and you can shut down United.

If Solskjaer wants to win trophies at United, he needs to build a side to specifically prevent what Southampton and Palace have done this week.

As such, Matic needs to be rested and kept fit for as many years as possible, but more importantly, Solskjaer needs to sign another defensive midfielder who can, eventually, control the middle third, protect his back four, and become United’s long-term solution in the position.

Right-wing is understandably a priority this summer, and signing Jadon Sancho (as per ESPN) is a crucial step towards bringing trophies back to Old Trafford. However, next season’s hopes could just as much be hinged on signing a long-term defensive midfielder, or at the absolute least, a short-term replacement who can relieve Matic without United losing their control of matches.