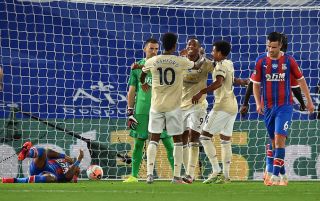 Manchester United squared off earlier this evening against mid-table Crystal Palace knowing they couldn’t leave London with anything less than all three points. Having seen Chelsea and Leicester City win their latest games against Norwich City and Sheffield United respectively the pressure cooker was turned up a notch.

Ole Gunnar Solskjaer named another strong side with just two changes which saw long-term absentee Timothy Fosu-Mensah come in for both injured left-backs Brandon Williams and Luke Shaw and Scott McTominay start ahead of Nemanja Matic.

As referee Graham Scott kicked the game off it didn’t take long to realise that United had started on the back foot.

Roy Hodgson had clearly taken notes from Southampton’s performance on Monday as his side looked to press United intensely from the get-go.

The Eagles started the game much the better side and arguably came closest to breaking the deadlock after exciting winger Wilfred Zaha forced United number-one De Gea to make a decent save early on.

As the first-half went on, United began to grow into the game more and more. The Reds looked most likely to get some joy from down the flanks as Aaron Wan-Bissaka continued to bomb forward as Mason Greenwood created the space by cutting inside. United’s wide men caused Palace’s back line no end of problems, however, worryingly, it took them the best part of 35 minutes to do so.

Just as half-time was seconds away the United faithful were given one heck of a scare as Zaha went down under what looked like a clumsy challenge from Victor Lindelof. Fortunately for United, VAR was not called upon and the decision not to award Palace with a penalty was upheld.

Despite going into the break 1-0 up, United still had many improvements to make in the second half. The Reds looked like they needed to up their tempo and sure up at the back in order to kill the game off.

As the second-half got under way it was obvious Solskjaer had issued his players with some stern words inside the dressing room as his side appeared to look more lively.

Despite United’s improved restart there was panic once again at the back as Palace appeared to equalise through striker Jordan Ayew at the back post just 10 minutes into the half.

However, upon closer inspection, VAR deemed Ayew was marginally offside (understatement) and the goal was ruled out. Still 1-0 to United but concerns were beginning to grow again as the Reds knew they needed a second goal to ease the pressure.

Just seven minutes later Solskjaer decided that he couldn’t flirt with a Palace equaliser any longer and opted for a couple of much needed changes. Scott McTominay and Mason Greenwood made way for Nemanja Matic and Jesse Lingard respectively.

The changes in personnel seemed to have a positive effect as just 15 minutes later United doubled their lead through a superb team effort finished off by the in-form Martial. 2-0 United and at last, a crucial two goal cushion.

Martial’s goal which was assisted by team-mate Rashford saw the pair break yet another club record. The strike due have now set one another up a combined seven times in this season’s Premier League which is the most any pairing has managed in a single season for the club.

7 – Anthony Martial and Marcus Rashford have now assisted one another a combined seven times in this season’s Premier League, the most of any pairing in a single season for @ManUtd in the competition. Wavelength. pic.twitter.com/s0uZRIYJZK

After the game Solskjaer gave an honest assessment of his side’s performance, admitting that the team must avoid starting games the same way they did this evening.

The manager also paid tribute to the Red’s attacking ability, stating that his side must inter-change and up the passing due to their effectiveness when they opt to play that way.

Overall, not United’s best performance since the restart, by a long way, however, performances don’t win points and undoubtedly Solskjaer and his side will just be happy to leave the capital with all three points in the bag.

The victory sees the Reds stay in fifth place in the table, although tonight’s result does mean the side’s top-four ambitions are still in their own hands due to a final day shoot-out against fellow hopefuls Leicester City.

United will now be focused on their next three fixtures which continue to come thick and fast. United’s next fixture is the small matter of an FA Cup Semi Final tie against Chelsea at Wembley Stadium.

Domestically, the Red’s two remaining games are against the in-form West Ham on July 22 before they travel to the King Power to face-off against Leicester City in what could be a potential Champions League play-off on July 26.