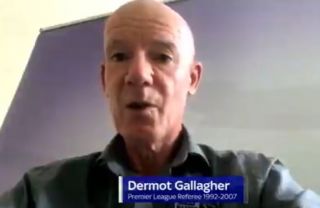 The incident has caused major controversy with former Aston Villa striker Gabriel Agbonlabor suggesting United have got away with these calls all season.

I wouldn’t go that far, even if my initial viewing of the incident looked like it should have been a penalty.

Gallagher, however, explains via Sky Sports’ The Football Show why Scott made the right call as Lindelof got the ball before the pair fell to ground.

You can watch Gallagher’s explanation below:

🗣 “It’s not a clear and obvious error”

Dermot Gallagher explains why Crystal Palace’s penalty appeal against Manchester United was NOT a penalty pic.twitter.com/iTBsEY55hF

Hopefully this doesn’t put referees on the spot and they are strong enough to carry out their job properly for United’s remaining games.