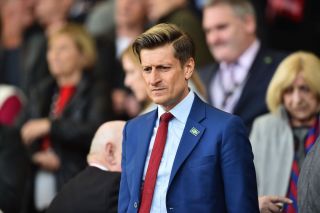 Crystal Palace may be saved from relegation but their form is certain to worry supporters. Perhaps that’s why chairman Steve Parish couldn’t hide his emotions whilst his side suffered a 2-0 defeat at the hands of Manchester United.

Parish may put that down to VAR conspiracies and we’re certainly not in a position to argue because it took United a very long time to get going on Thursday night. I guess it was reminiscent to Monday night’s game but against a weaker side who failed to put the ball in the net…

Everyone will be talking about the referee Graham Scott’s decisions in the morning and I don’t blame them, especially Palace supporters. Do I care? Not particularly but it’s a different story when our team is on the receiving end of such decisions.

Steve Parish took to Twitter on Thursday night slamming the decision not to reward Palace a first half penalty when Wilfried Zaha was brought down inside the box.

How can they look at Sakho ‘handball’ for minutes to make their ‘mind up’ and not even give that a glance! It’s a stonewall nailed on penalty even the most one eyed Man U fan knows it. #cpfc #mufc

They are safe in the Premier League until next season but Roy Hodgson will need to improve his squad in the summer, which could be a daunting task if Zaha moves on to a bigger club.