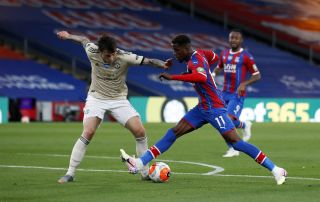 There has been a lot written about VAR this season and every week it seems to spark controversy in the Premier League.

Some argue that rules need changing in order for VAR to succeed but that doesn’t excuse some of the calls we’ve seen in the league this season. The Harry Kane penalty shout two weeks ago was a stonewall pen ignored by not only the referee but a VAR check somehow didn’t see the decision reversed.

Former Aston Villa striker Gabriel Agbonlahor hit out at the Red Devils on The Football Show (a Sky Sports production) for ‘getting away’ with controversial incidents that involved VAR.

It may be relevant to bring up United in conversation now — following the Bruno Fernandes penalty against his former side — but last night they spent 15 minutes or so on BT Sport discussing VAR rather than analysing the game. Is this really what we need to be discussing again the next morning? It seems excessive.

🗣 “Manchester United keep getting away with these calls, It’s happened all season”

Gabriel Agbonlahor believes VAR got it wrong with Crystal Palace not being awarded a penalty pic.twitter.com/ZV6wOdFB5U

And for me, that’s the biggest issue right now. I know it has to be discussed but there’s too much of it and we’re missing insight on the actual game.

The incident Agbonlahor was referring to last night saw Victor Lindelof challenge Wilfried Zaha inside the box. At first it looked late but Ole Gunnar Solskjaer made an argument after the match saying Lindelof made initial contact with the ball.

What do you think about VAR? Send a tweet to @StrettyNews and let us know.