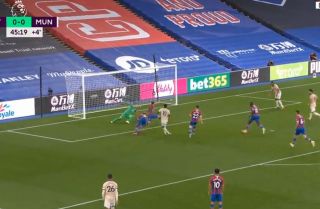 It has been a cagey affair at Selhurst Park but at least Manchester United go in at half-time with an important lead.

Marcus Rashford opened the scoring against Crystal Palace on the brink of half-time after a pretty dull 45 minutes.

Crystal Palace fans will argue they’ve been the better side since kick-off and I wouldn’t even debate that with them. United haven’t been at the races but we’ll take the one goal cushion!

Rashford showed great composure on the ball and when he released it into the bottom right corner.

Watch the goal below, courtesy of RMC Sport:

United need to push on early in the second half in search of a second goal. That will be too big of a climb for Palace…