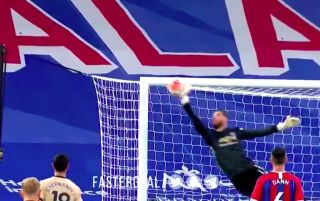 United took a narrow 1-0 lead into the break, with Marcus Rashford showing fantastic composure to slot home with half-time beckoning.

Ole Gunnar Solskjaer’s men have looked lethargic and cumbersome at times, and have De Gea to thank for not conceding.

The Spanish international pulled off a great save to tip behind Luka Milivojevic’s free-kick that appeared destined for the top corner.

He earlier made a more routine save. keeping out Wilfried Zaha’s well struck effort to prevent a Palace opener.

See the save on the stroke of half-time below, courtesy of BeIN Sports: