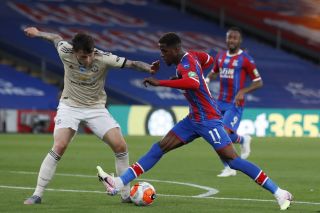 Manchester United fans may be feeling relieved that their side went into the half-time break 1-0 up after a rather lacklustre display. On the other hand, their opponents Crystal Palace will undoubtedly be feeling hard done by after not being awarded a penalty late on the first-half.

Just after United attacker Marcus Rashford opened the scoring for the Reds, Palace found themselves deep into their opponents half with main-main Wilf Zaha running at the United back-line.

The ex-United winger went down under a challenge from United centre-back Victor Lindelof in what could easily have been given as a penalty kick.

Rio Ferdinand disagreed with the referee at half-time, admitting on BT Sport that a penalty kick should have been rewarded in Palace’s favour. They’ve had a goal ruled out for offside at the beginning of the second half.

Lads he doesn’t touch the ball one bit, straight into Zaha’s leg pic.twitter.com/4RAFE0LYVi

Let us know what you think by sending a tweet to @StrettyNews!