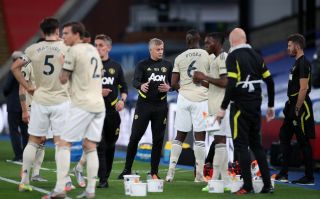 Manchester United extended their unbeaten run to 19 games with a vital 2-0 victory away to Crystal Palace.

Ole Gunnar Solskjaer’s men were not at their scintillating best, but kept hopes of a top four finish alive thanks to superb finishes from in-form frontmen Marcus Rashford and Anthony Martial.

Here are three things we learned from the crucial victory at Selhurst Park.

Ideally, Nemanja Matic would not have been used this evening after five consecutive starts in the league and Sunday’s FA Cup semi-final at Wembley on the horizon.

Scott McTominay started in the double midfield pivot with Paul Pogba but looked cumbersome and began to be overrun as the game opened up early in the second-half.

But Solskjaer did not hesitate to bring on his assured Serbian international as United were struggling to assert their dominance in the middle of the park.

Matic is the calming influence United need when games are becoming a frenzy and provided structure and control to proceedings with prudent passing and his imposing presence shielding the back four.

The 31-year-old made a marked difference after being brought on just after the hour mark and will no doubt have a key impact in the coming games.

Rashford back to his best

Rashford has perhaps been unfairly criticised since the restart for not hitting the ground running in the same fashion as Paul Pogba who was also returning from a long-term absence.

The England forward was United’s talisman before his injury in January and was totemic against Palace on an evening some of his teammates looked lethargic.

He netted his 22nd goal of the season in glorious style; there was almost a touch of arrogance as he slotted home after deceiving the opposition defence.

Rashford is at his best when he is direct and became unplayable as a frustrated Palace tired in the second-half.

A goal and an assist on the night for Rashford and Solskjaer will be delighted he is hitting his best form ahead of a decisive 10 days in United’s season.

Are Diogo Dalot’s days at Manchester United numbered? The signs are ominous if his manager’s selection for tonight’s game had anything to go by.

Dalot appeared a shoo-in to start if Luke Shaw and Brandon Williams failed to make recoveries from injuries sustained against Southampton but Timothy Fosu-Mensah was instead brought in from the cold.

Solskjaer proved he is not to afraid to make bold calls and fortunately, the decision to give Fosu-Mensah his first United start in over three years in the unfamiliar left-back position did not backfire.

Granted, the Dutchman was sloppy on the ball and offered very little going forward. But he dealt with his defensive duties diligently and managed well given the circumstances.

Dalot, meanwhile, may be starting to wonder where his long-term future lies after making just one start since the restart.