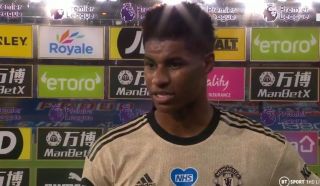 In what wasn’t the most convincing display, Manchester United got the job done against Crystal Palace at Selhurst Park.

Marcus Rashford look relieved after the match and admitted they had to work double hard to get three points away to Palace.

He stresses the importance of winning our remaining two games in the Premier League which would secure Champions League football for next season.

Rashford belongs to the biggest stage in football and he’s not alone in the United dressing room when I say that. They need to do everything they can to achieve that in the next two weeks!

After scoring the opener and assisting Anthony Martial, Rashford credited his team-mate who deserved a goal.

Rashford told BT Sport, as seen below: “He’s done a lot of work today, Anthony, he deserved a goal.”

“He’s done a lot of work today, Anthony, he deserved a goal.”

“We’ve just got to go and win every game now.”

Marcus Rashford gives his view after a goal and an assist ensured a vital three points for Man Utd.