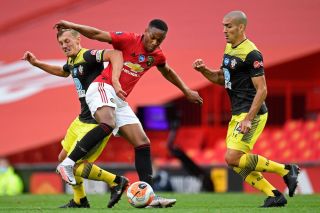 Manchester United are in Premier League action tonight when they travel to the capital to take on Crystal Palace in Thursday’s encounter at Selhurst Park.

Although it could change, Roy Hodgson’s Palace side have little to play for but they need to improve on their form — winning just one of their last six games in the Premier League. The sort of form that will see them struggle to stay in the top flight again next season.

It could be an interesting summer for the Eagles.. Going from interesting to disastrous if they were to be relegated to the Championship. Still, there’s a very good chance Wilfried Zaha will eventually move on and pastures new. It’s a huge shame it never worked out for him at Old Trafford but I am convinced he could have a great career at another top club.

Deprived of his goalscoring abilities these days, Christen Benteke is suspended for Palace’s last three games of the season after being shown a straight red card in their 2-0 defeat to Aston Villa on Sunday. We can expect to see Jordan Ayew to move centrally with Andros Townsend making an appearance from the wing.

Having lost their last five matches in the league, Palace should be up against it when the game kicks off because United don’t have time to waste. They need to get the job done and we think the Red Devils will breeze it. There are football betting sites like this that you can earn a few quid on if you are that way inclined because the odds swing in United’s favour.

Ole Gunnar Solskjaer has problems of his own.

The team is starting to get tired and they have will only have 48 hours to prepare for Sunday’s FA Cup semi-final against Chelsea.

Luke Shaw twisted his ankle in the 2-2 draw with Southampton on Monday night and is considered a doubt for this game, along with Mason Greenwood and Brandon Williams, who also went through the wars with the Saints in midweek. The manager will call upon Diogo Dalot if neither left-back is available.

Moreover, there has been over 2.5 goals scored in United’s last 5 matches in the Premier League, so I think we’ll see goals tonight with Palace struggling to get results as well as missing key personnel in defence.