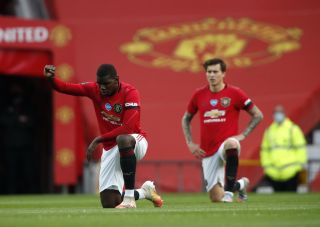 It seems like Paul Pogba could stay at Manchester United beyond the summer.

The French midfielder is reportedly close to agreeing a new five-year Manchester United deal in a shock u-turn.

It has been a difficult campaign for the World Cup-winner due to injuries, but he’s been a key player since the resumption of the Premier League, with freshly enforced good vibes around the dressing room.

According to Neil Custis of The Sun, Manchester United are confident of announcing news of Pogba’s contract extension at the end of the season — presumably once Champions League qualification is sewn up.

With Ole Gunnar Solskjaer trying to plan a squad for the future, I strongly believe that he wouldn’t want Pogba around if he thought he wasn’t bringing the right attitude and form to the table.

“I’ve been speaking more or less every day with Paul,” Solskjaer said at his press conference yesterday morning, as per Sky Sports. “He knows he wouldn’t be dropped.

“When Paul plays like this, he wouldn’t be dropped from any team in the world — France or Manchester United — but he’s been out for a long, long time.

“There was a question mark before the game against Southampton but he felt ready for it, which was great, so now let’s see how he is.

“He’s been fantastic since the restart and brought a lot to the team.”

Surely if Pogba puts pen to paper over a new deal any talk of Aston Villa’s Jack Grealish would be put to bed. Solskjaer needs to strengthen defensively along with a big name like Jadon Sancho!