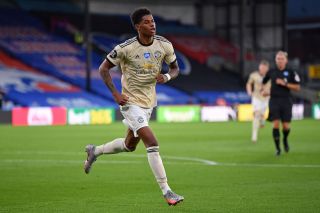 Marcus Rashford was back to his scintillating best as Manchester United secured a crucial victory over Crystal Palace at Selhurst Park.

United are now level on points with Leicester in 4th and one point behind Chelsea in third after extending their unbeaten run in all competitions to 19 games.

Rashford was talismanic for the Reds in what was a must-win game, and is improving as the games go on after a slow return from injury.

Ole Gunnar Solskjaer made two changes from his side that drew to Southampton on Monday but lacked any impetus or penetration in the first-half.

Rashford, however, was United’s main source of threat and opening the scoring on the stroke of the break. He showed ultimate composure to fool the Palace defence with a quick turn before slotting home.

He then became more direct in the second half as Palace tired, and deserves great credit for his goal in United’s crucial second.

The England international weighted his pass perfectly for Martial to take the ball in his stride and find the bottom corner.

In scintillating form at Selhurst. 🤤 pic.twitter.com/vkw1wwdrkx