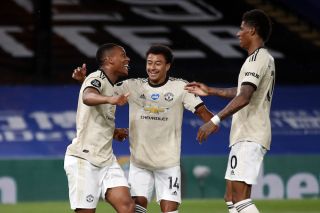 Here are our Manchester United player ratings from tonight’s 2-0 victory over Crystal Palace at Selhurst Park:

Produced three good saves in the first-half including a Milivojevic free-kick that was destined for the top corner. Saved brilliantly with his feet from Zaha in the second-half and was a definite contender for man of the match. 8

Former teammate Wilfried Zaha caused Wan-Bissaka more problems than any winger has this season. He looked lethargic throughout and was wasteful with his crosses. Surely due a rest in the coming games. 4

Made a crucial tackle early in the second-half to thwart Jordan Ayew through on goal. Largely solid defensively but squandered two good opportunities in the air from United corners. 6

Fortunate not to give away a penalty in a coming together with Zaha and provided a number of jittery moments at the back. Ultimately deserves some credit for keeping another clean sheet. 5

It was a huge gamble from Solskjaer to select the Dutchman in an unfamiliar position. Predictably sloppy in possession but dealt with his defensive duties fairly well. 5

Lacked dynamism and impetus as United struggled to assert their dominance in midfield and was replaced by Nemanja Matic on the hour mark. 5

Shrewd in his use of possession without providing any moments of brilliance. Becoming crucial to United in their pattern of play. 6

Picked up another assist for Rashford’s opener. Always a danger on the half turn as he looks to unlock the door against an obstinate Palace defence. His nutmeg in the build up to Martial’s goal was glorious. 7

Showed excellent composure to score his 22nd goal of the season on the stroke of half-time. Stepped up his game in the second-half and looked unstoppable in the closing stages. 8

Greenwood looked lethargic against Southampton on Monday and was again ineffective after being a doubt for tonight’s game. He uncharacteristically squandered a great opportunity to give the Reds the lead in the first-half. 5

Constantly looked to cause problems even when United were lacking in any fluidity in the first-half. His second-half strike combined strength and composure and the Frenchman is showing why Solskjaer sees him as his long-term striker. 7

The calming influence United needed when the game was becoming frantic. Passed prudently and slowed things down as the Reds gained control in the latter stages. 7

Provided some energy and enthusiasm from the bench without a killer instinct in the final third. 5