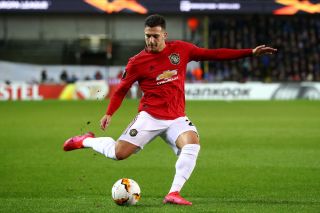 Diogo Dalot has been named on the bench for Manchester United’s trip to Selhurst Park tonight.

Many expected the Portuguese full-back to get the nod tonight after Luke Shaw and Brandon Williams were both substituted on Monday night after picking up knocks, but manager Ole Gunnar Solskjaer has thrown a surprise into tonight’s team.

Timothy Fosu-Mensah makes his first appearance of the season at left-back with Dalot being overlooked again. He hasn’t had many chances this season due to injuries, but we are no convinced that Solskjaer fancies his chances in the team long-term.

That may come as a surprise. José Mourinho signed Dalot in 2018 and sung his praises as being one of the best young full-backs in Europe. Now, having seen him play, I can certain acknowledge his potential but I’ve not seen enough quality to believe he has what it takes to be a starter at Manchester United.

Not even tonight, clearly.

Over on Twitter, United fans are suggesting this news may spell the end of Dalot’s future. See below:

Fosu Mensah is in to start ahead of Diogo Dalot after a year out injured and being loaned out to two clubs is a very big call. Diogo will be gutted.

Very happy for Timbo — excited to see how he copes.

Tells you all you need to know about Dalot.

Timbo back in the line up over Dalot? A certain someone might be utterly finished at the club. If Laird is chosen next too, it’s curtains. #CRYMUN

Fosu-Mensah is faster and stronger than Dalot, not better in the terms of attacking one bit than his counterpart but we have enough strength going forward. This change has been made, keeping Zaha in mind. Still a big call for a lad who last made an #mufc appearance in 2017.

Dalot is finished. Mensah starts ahead of him imagine that. 😳

We shouldn’t forget this is a great opportunity for Fosu-Mensah. The Netherlands international has had a difficult few years with troublesome loan spells and bad injuries.

We can only hope this is the beginning of his break into the United first-team.