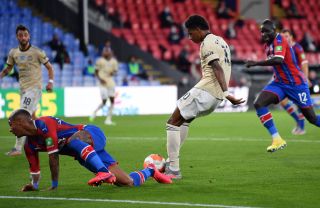 Manchester United and Crystal Palace have reached half-time in a game which has severe implications in the race for the top-four.

After seeing rivals Chelsea and Leicester City win their latest games against Norwich City and Sheffield United respectively all the pressure is on the Reds to grab all three points this evening.

The first-half has been far from a sporting spectacle with United starting much the slower of the two sides.

Crystal Palace who obviously took notes from Southampton’s performance on Monday came flying out of the blocks and looked to press the Reds intensely.

Palace winger Wilfred Zaha came closest to opening the scoring after just five minutes when he got the better of ex-Eagles defender Aaron Wan-Bissaka and fired a shot on goal which forced David De Gea into action.

It wasn’t until around the 35 minute mark that United finally started to grow into the game with increasing joy coming down the right hand side.

United attacker Marcus Rashford opened the scoring just shy of the half-time break after some decent link-up play in the box with team-mate Bruno Fernandes.

Ole Gunnar Solskjaer will be keen to regroup his side and inspire a better second-half display despite narrowly leading the game 1-0.

Fans have taken to their social media to express their concerns and relief after their side’s lacklustre first-half display.

Massive goal just before Half time. Great 1-2 from Fernandes and Martial and brilliant skill and composure from Rashford. #CRYMUN #MUFC

We quicken the tempo for once and we score. Palace are shit. Go for the kill ffs.#MUFC

RASHERS!!!! What a fantastic finish!! What incredible team play in the build up to the goal Bruno the magician again! I was saying we needed to get our goal before HT n get in we delivered! First truly high tempo move n we get our rewards that’s the way! #MUFC #GGMU

Finally!!!! 1-0 Rashford 45+4 great composure to take that chance. Need to see more one touch football, faster moving forward in the second half. #MUFC

That’s what we can do when we play risky balls, moving it forward with pace.
The players seem nervous today.
Stupid fouls, poor passing.#MUFC #CRYMUN

About time we scored, now click lads and get more goals. Great goal from Rashford too #MUFC

Yeah, not impressed with that performance. Play like that in the second half and we’ll be lucky to come away with a point… #mufc #ManchesterUnited 😠

Y’all werent joking about Palace turning into Barça tonight.
They’ve played better ball than us.
Lucky to be ahead.#CRYMUN #mufc