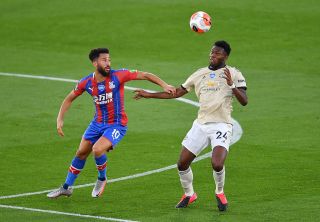 The Red Devils came away from Selhurst Park with three points in their bid to clinch a top four spot in order to qualify for the Champions League.

Fosu-Mensah, 22, was a surprise inclusion at left-back in the absence of the injured Luke Shaw and Brandon Williams. Our two primary left-backs missed tonight due to knocks picked up against Southampton on Monday, but it was good to see the Dutch international back in action at Selhurst Park, where he spent a season on loan.

Although I’ve read about Fosu-Mensah putting in a solid performance, I thought he was a bit off the pace tonight, which I guess is to be expected. He didn’t do poorly for a lad who played his first game of the campaign — just before the season ends!

Fosu-Mensah spoke to MUTV after the match: “It feels good to play for the club again, I’m more happy that we got the win today.

“Comfortable is a big word but I’ve played there [left-back] before,” he added. “I think I came on against Arsenal as a left-back, I can play in a lot of different positions.

“It was hard, but that’s what you work such a long time for, all these months for a moment like this. That’s football, something like this can happen and you have to be ready, especially at a club like this. I think I was ready for this moment.”

Williams should be back for Sunday’s FA Cup semi-final against Chelsea, but Solskjaer is expected to give an update on the duo in the coming days when he speaks to the media before traveling to Wembley.