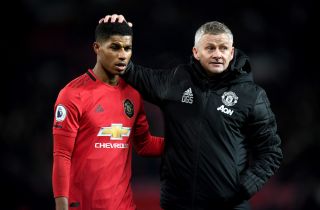 Ole Gunnar Solskjaer has reiterated his pride in Manchester United forward Marcus Rashford after he become the youngest ever recipient of an honorary degree from the University of Manchester.

Rashford is to receive the honorary doctorate from the university for his incredible work in campaigning against child poverty in the UK.

The 22-year-old was successful in causing a government U-turn on allowing free school meal vouchers to be extended through the summer to help support the poorest and most vulnerable families during the coronavirus crisis.

As well as his campaign for free school meals, Rashford has also had a profound impact on society in his work with charity FareShare, where he has helped supply enough food for four million meals for vulnerable families across the UK.

Rashford was raised in Wythenshawe, south Manchester and has drawn on his own experiences in childhood as motivation to help others in similar difficult situations to the one he was in.

Solskjaer was asked about Rashford receiving the honorary degree in Wednesday morning’s press conference ahead of United’s crucial clash against Crystal Palace at Selhurst Park.

“We’re so proud of Marcus and I’ve said it a few times, great person he is and great human being,” he said, as quoted by the Manchester Evening News.

Rashford has joined the likes of Sir Alex Ferguson, Sir Bobby Charlton and Vincent Kompany to receive the doctorate, which is the highest honour the university can bestow.

“It’s a proud day for myself and my family,” Rashford said, as quoted by the Guardian.

“When you look at the great names that have been awarded this doctorate in the past, it’s humbling.

“We still have a long way to go in the fight to combat child poverty in this country but receiving recognition from your city means we are heading in the right direction and that means a lot.”

We are delighted to make @England and @ManUtd footballer, @MarcusRashford, our youngest ever recipient of an honorary degree. pic.twitter.com/6QRtopJwqU

A message from me to you ♥️ pic.twitter.com/GZzajvUw5l