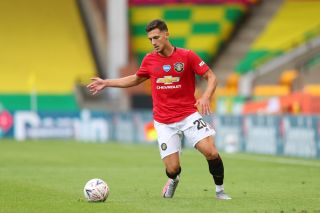 Diogo Dalot could make his return to the Manchester United starting line-up against Crystal Palace on Thursday evening if Brandon Williams and Luke Shaw fail to make a full recovery from injury.

Ole Gunnar Solskjaer has been dealt with a potential left-back crisis after Shaw and Williams were both forced off in United’s 2-2 draw against Southampton at Old Trafford.

Shaw came off in the second-half after rolling his ankle while breaking into the final third. The 25-year-old’s replacement Williams was then involved in a sickening head collision with Saints right-back Kyle Walker-Peters, and required stitches after blood was seen gushing from the youngster’s face.

Both are doubts to face Crystal Palace, though Solskjaer confirmed in Wednesday morning’s press conference that he will wait to make a decision on the pair.

And according to the Manchester Evening News, Dalot is fit and ready to fill in at left-back should be required.

The Portugal youth international has not made a Premier League matchday squad since the restart and looked off the pace in his solitary FA Cup start against Norwich.

Dalot presents Solskjaer with a more experienced option than alternative Ethan Laird, but ideally either Williams or Shaw will be able to make a full recovery and start at Selhurst Park.