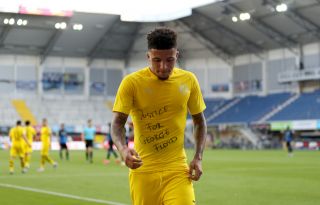 It seems like Jadon Sancho’s potential switch from Borussia Dortmund to Manchester United could accelerate if the Reds qualify for the Champions League.

The Dortmund sensation has been heavily linked with a move to Manchester United, as per Sky Sports, but Ole Gunnar Solskjaer’s team have yet to book a place in next season’s Champions League, a stage Sancho has built his reputation on.

Each day we await updates on Sancho and in this day and age it can be difficult to know what to believe. BILD Sport journalist Christian Falk claims the Bundesliga outfit are expected a €120m offer from Manchester United so long as they qualify for the Champions League ‘directly’.

The report has since been cited by the Daily Mail and that’s pretty much the only thing we have to go on at the moment.

By directly, he presumably means third place but I can’t see how finishing in fourth would change Sancho’s mind about coming to United, if he needs extra assurances.

United will undoubtedly be a more attractive destination if Champions League football is secured, though the team is making clear progress and appears to be going in the right direction under Solskjaer.

Surely Sancho would like to be a star behind this side?

Read more: Diogo Dalot ready to step in at left-back for Manchester United against Crystal Palace