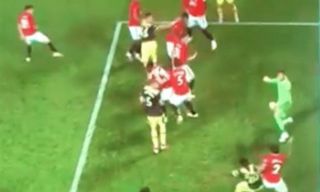 I went to bed last night the same way I woke up… in a mood.

The result was disappointing but Manchester United’s performance did not warrant more than a point.

Southampton played really well and pressed like a pack of wild dogs, though we will need to be find ways to come out of games like that with three points if we are to challenge for the title anytime soon.

Questions will be asked of centre-back and club captain Harry Maguire after his shambolic defending for Southampton’s equaliser in stoppage time.

As the corner swung in, Maguire was caught on camera marking his own player! (Footage via Sky Sports)

Maguire marking his own player 😭😭😭😭😭😭😭😭 pic.twitter.com/D3cvfmR3Bq

That’s extremely poor from an international centre-back and it’s one of many mistakes he has made since the resumption of the Premier League.

It’s not good enough and we’d probably be talking about another three points on the table this morning if it wasn’t for that. Sitting in third place knowing Solskjaer is in the driving seat.

Perhaps I’m overreacting as it doesn’t change too much. Win the rest of our games and we’ll be back in the Champions League.