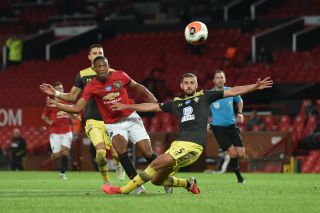 Garth Crooks has picked his latest BBC team of the week based on the Premier League action over the last few days.

This week he has gone for a line-up with five forwards in a 3-4-3 formation.

It only contains one Manchester United player this week and it was a scorer from our 2-2 draw against Southampton.

Anthony Martial was excellent against Southampton but he had a chance to get a third for United and he will undoubtedly be disappointed with that. Not winning last night meant we missed out on an opportunity to go third in the Premier League.

With three games remaining, I fancy our chances because Chelsea and Leicester are bound to drop more points along the way.

Crook wrote the following on Martial in his BBC column: “My goodness was Anthony Martial in the mood against Southampton. The way he took his goal was quite phenomenal. The determination on his face the moment he picked up the ball outside the box and started to make his way into the Saints penalty area there was only one thing on. His mind and that was hitting the back of the net.

“It was only a few days ago Martial was substituted against Aston Villa and came off the field with a face like thunder. The best strikers hate being dragged off especially if they haven’t scored. However what is becoming clear is the Manchester United striker is growing in confidence and seems to have the resolve to make the centre forward spot very much his own.”

The Frenchman became the 10th player to score 50 Premier League goals for United, which is a nice milestone to reach since it’s been his best season since joining the club in 2015.

Do you think Martial will be our main centre forward next season?