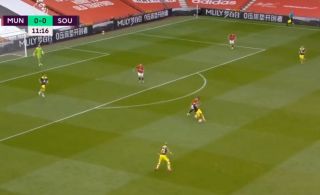 Take nothing away from Southampton, they’ve been the better team since the start.

Manchester United appear to be playing in the wrong areas and the opening goal from Southampton was coming.

Ole Gunnar Solskjaer’s side started slowly and Stuart Armstrong was in the right place at the right time — at the back post — to put the ball past David de Gea.

Many will point the finger of blame at Paul Pogba for sloppily losing possession of the ball in a dangerous area, but Luke Shaw was also caught in no-man’s land and deserves criticism too.

The French was far too casual with the ball upon receiving a pass from De Gea. He ran into trouble and the Saints took advantage.

United need to wake up. A win puts us into third place in the Premier League.

This is shaping up as a huge disappointment…