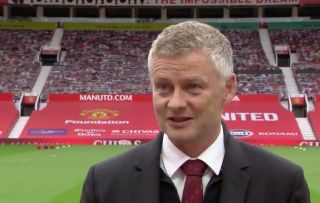 Ole Gunnar Solskjaer believes his favoured Manchester United starting XI have had enough rest to continue their impressive form with victory over Southampton this evening.

As noted by Manchester Evening News journalist Samuel Luckhurst, Solskjaer has named a fifth consecutive unchanged team in the league for the first time since February 1993.

The Norwegian has finally found his best United side and the continuity in selection has bene crucial in yielding consistent performances.

But Solskjaer did acknowledge in his pre-match interview that some rotation may be needed shortly, with United beginning a demanding stretch of three matches in six days.

The Reds can leapfrog Leicester City and Chelsea into the third this evening after their top four rivals were defeated this weekend to Bournemouth and Sheffield United respectively.

The boss spoke to #MUTV about his decision to name an unchanged #MUFC starting XI for a fifth consecutive game 🎤#MUNSOU pic.twitter.com/HYpEIcZTBA