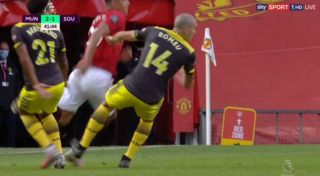 Romelu appeared to be late and malicious with a left-footed stamp on Greenwood’s leg, but the referee did not see any wrongdoing.

But more remarkably, a VAR check done without the referee’s consultation also saw nothing wrong with a tackle that could have resulted in serious injury for United’s young star and was surely worthy of a straight red card.

United great Gary Neville was surprised that no punishment was given, suggesting Romeu ‘tried to do’ Greenwood.

Neville said on Sky Sports commentary that those type of challenges can be ‘leg-breakers’ and we think Southampton can count themselves lucky that they are not down to 10 men.

See the altercation below, courtesy of Sky Sports:

Romeu challenge on Greenwood (No foul or card) from r/soccer